There’s a saying that goes “just because you can do something, doesn’t mean you should.” It’s a good maxim and well enough known that a simple “just because you can…” is enough to get the point across to most people. It means that actions aren’t worth taking unless you’re sure you want to take them. To be sure requires thinking and reflection.

I blog a lot about best practices on the web and I recently realized that this phrase gets to the heart of so many issues I run into when helping people use tools like WordPress to build accessible and usable websites. Just because it’s an option… Just because that feature exists… Just because another website does it…

Despite what you may think or wish was true, the tools we use to build websites are not perfect. They include features built by people who don’t think through all the uses. They allow users to do things that are appropriate in specific use-cases but not others. They even sometimes include features that really shouldn’t exist at all. Misconceptions and worst practices thrive across the web, even among technically adept developers who may have excellent technical skills but little-to-no design and usability experience.

This is all to say that you, as a website administrator, must look out for yourself and your users to make sure that when you use a feature or option it’s appropriate.

Here are three examples—some old and some new—of features that I think squarely fall into the “doesn’t mean you should” category.

Whenever you want to insert a link into a WordPress post, the default interface gives you three options, two of which you should never ((For advanced users, you may be aware that the “new window/tab” option is appropriate for use on pages that contain form data or other “processes” that could be interrupted by loading a new page in that same tab or window. However, this is a rare enough and advanced enough edge-case that I think “never” is generally the right advice to give.)) use! 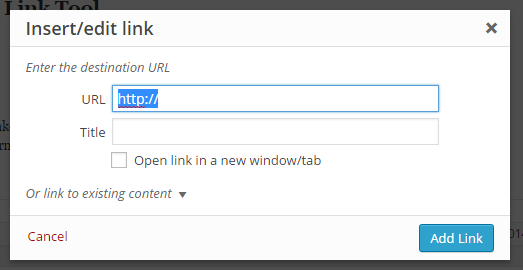 I’ve blogged about both offending features in the past.

Our next example comes from the upcoming Gravity Forms 1.9 plugin (affiliate link). I love Gravity Forms but I’m disappointed they’ve added one of the new features in this version.

The Gravity Forms Name field creates a nice unified field capable of separately capturing first, middle, and last name as necessary, but in the new v1.9, the name field comes with a new option to ask for a “salutation” (they call it a “prefix”): ((Luckily, even if the Name field is required, the prefix field can be left blank by the user submitting the form.)) 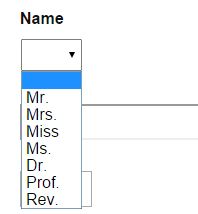 I’m a little surprised as it’s a new field because it seems like a rather outdated idea to me. As I’ve mentioned in the past, “Salutation,” “Gender,” and “Sex” fields all force a site visitor into a socially-constructed binary that not all people ascribe to. Worse yet,  a salutation field is often used to try to infer gender or sex rather than coming out and asking directly. It’s often possible to just simply not use it and that’s what I would recommend. Unless your site audience consists of various levels of royalty, please don’t use a salutation field.

The final example comes from the world of translations. Coincidentally, I covered why you shouldn’t use flags to represent countries in the same brief post about not asking for gender in forms.

The feature was an interesting idea but one that’s now become unfortunately common. Many translation services offer it as an option or even the default. You shouldn’t use it!

I’ve closed posts with this message before, and I’ll do it again here.

It’s impossible to know the absolute-best-#1-perfect option for everything everywhere, but that doesn’t mean we shouldn’t try to follow as many best practices as possible. Whenever you can, find the time to slow down and make sure you understand the full ramifications of a checkbox you mindlessly checked or a plugin you quickly activated. Question your assumptions, research best practices, ask for help, and follow to the experts. A lot of small improvements by a lot of site owners over time can lead to a drastically better web for everyone

What’s you’re favorite example of a “just because you can” website feature?

6 thoughts on “Just Because You Can…”