Learn enough about any subject and it tends to become interesting.

I was musing about them this time two years ago. Last week I started following the Emojipedia blog after I realized how much I was thinking about emoji. Examples abound.

In general, any attempt to make hundreds of tiny icons—this size: ⬛—recognizable is a huge challenge. It’s hard enough in the U.S., never mind the fact that thumbs up and head nodding may not mean what you think they mean in other cultures. In their usability testing, Nielsen Norman Group found barely any consistently meaningful icons on the web (the search glass is one exception).

Icons also reflect the societies which design them. Recently, I was reading a short piece in Wired (apparently not online) about Paul Hunt’s attempt to make gender neutral / “gender inclusive” emoji (I don’t think “neutral” is possible, but I see how these are inclusive). Making it worse, most emoji of associated with professions (construction, police person, etc.) have reinforced gender role stereotypes until recently.

Adding new emoji can sometimes highlight what’s not there. The new support for more flag emoji highlights contested parts of the world that are and aren’t reflected in the lists of potential flags. That’s not far from the colonial connotations of many flags when used to represent languages.

Emoji also carry interesting bits of history in them. There are great emoji for sushi, bento boxes, and sashimi, but hotdogs and tacos are just now becoming available. We owe Japan for the rise of emoji and so the original available icons still influence what’s available—and therefore how we communicate—today.

Finally, we even get an interesting language debate simply about pluralizing emoji!  Do you follow English’s add-an-“s”-except-sometimes-when-you-don’t structure or stick with the traditional Japanese plural form? (You can guess my preference from the title.)

And I almost forgot to mention, these emoji get designed and redesigned and designed again, meaning you can’t always be sure what the emoji on your phone looks like when it arrives at its destination. Samsung thinks a cookie is two saltines…

And just to drive home the point about technological implementation problems with emoji… That nerd emoji I used at the top? Not supported by the version of Android I have on my phone. Frustration emoji. 😤 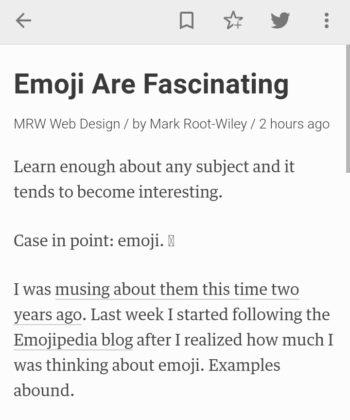