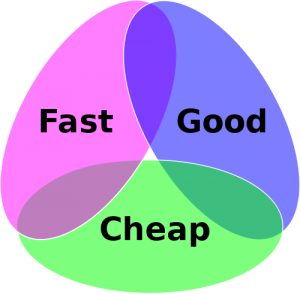 There’s a classic maxim that if you’re doing a project, you can have two out of these three:

You can have something that’s:

I think there’s a corollary of sorts in web design—and probably other fields—with the following: 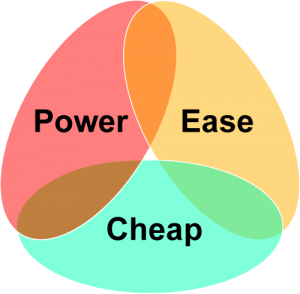 That gives you these three options:

(In both examples above, the “cheap” axis can be measured in both money and time.)

Let’s use the example of a simple feature on a WordPress website: the text editor.

A stripped down version of the editor (what I use for most client websites) is easy to use. It uses buttons that can also be found in Word or Gmail so people know how they work. It’s also cheap since that’s what comes with WordPress (money “cheap”) ((I add a small set of customizations that are the same on every site so they don’t take any extra time to deploy.)) and clients can quickly enter lots of text (time “cheap”). However, there are tons of “extensions” that add advanced HTML, tables, font styles and more with the editor. I avoid these when possible because they’re expensive both for me to implement (money) and the clients to learn (time) and use (time again!). ((There’s a third “time” cheap cost of this specific type of power too. It’s inefficient. There are faster ways to regularly add 20px red bold text or 15px gray italic text. The problem is if you want any combinations of styles. That power means having to choose three things every time instead of one set “style.”))

This is a hard trade-off to accept. We often want the Rolls Royce, but it comes with big trade-offs. When making decisions on website features, it’s important to be aware of what you give up when going for power and ease. It’s also why I wrote some time ago about the wisdom of learning to use a tool the way it was intended and not how you want it to work.

So what do you think? Does this make sense? Is this as universally true as the Free/Cheap/Good triangle?

2 thoughts on “Ease, Power, and Cost”