Update May 5, 2015: Since writing this post, a new plugin Archived Post Status has come out to fill in this exact gap. The new “Archived” status works just like “Draft,” as described below, but is made for this single purpose. I was so excited by this plugin that I added explicit support for it in Post Status Menu Items.

I do a lot of trainings. Just about every project I do ends with one. One really easy to use tip I always give is this:

Don’t delete something; make it a draft.

WordPress does have a “Trash” feature. Once you delete a post, it’s held in a “trash can” for 30 days before it is permanently deleted. ((If you have old database backups and a lot of patience, you might be able to get it back, but not easily.)) However, there are many easily-imaginable scenarios where a deleted post might be re-used or needed later:

In each case, what’s important is not that the content doesn’t exist anymore—literally—but that website visitors can’t access it. Storage is cheap and your time is not, so keep the posts, just don’t make them accessible.

Drafts and How to Make Them

In the WordPress interface, ignoring old content is much easier than rewriting lost content. That’s where the draft comes in.

WordPress has multiple “post statuses” that identify where a post is in its editing process and who can see it. By default those statuses are:

When a post is set as a Draft, you have two ways to save it. If you click the big, bright “Publish” button ((In all these screenshots, the “Publish” button is red because I use the “Midnight” admin color scheme on my site. You can choose from one of eight color schemes on your user profile. No matter what, though, that button is in the same place and in a bright, contrasting color.)), you’ll save the post and make it visible to the whole world [wide web]: 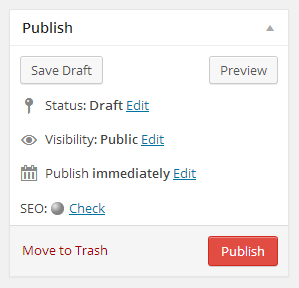 Alternately, you can click the “Save Draft” button to keep the post private in WordPress for later use. 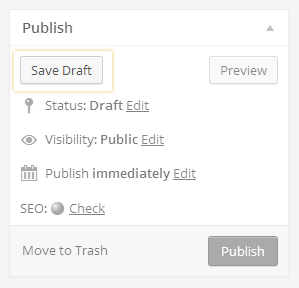 On any post that’s already published, the “Publish” button changes to “Update.”. If you want to change a published post back to a draft, you’ll use the “Edit” link next to the “Status” field to set the post back to “Draft” and then click “Update.” 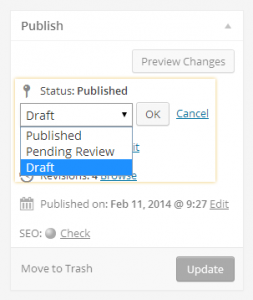 When your page reloads, you’ll see the first of the above screenshots again and use the “Save Draft” button to save changes without making the page publicly viewable.

That’s the basics and all you need to know. However, there are a few plugins that make managing all these posts a little easier.

WordPress makes it possible to see only posts of one status, but it’s not as easy as I wanted, so a few years ago, I built the Post Status Menu Items plugin for WordPress. The plugin adds each status to your WordPress admin menus so you easily view only Published posts or only Draft posts. 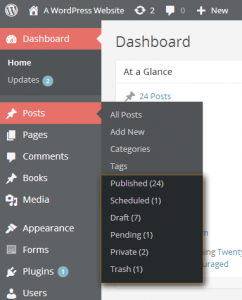 Once you stop deleting posts and start keeping old ones, you may find this simple plugin makes it a little easier to manage your growing lists of content in the WordPress backend. It also comes with a couple other features to add the statuses to your “At a Glance” dashboard widget and show icons for each status in the “All Posts” screen.

If you really want to get fancy, you may want to create a new status for previously-published-now-unpublished posts. You might call this custom status “Deleted,” “Archived,” or “Removed.” It would function just list the “Draft” status that comes with WordPress but would allow you to separate posts that you’re actively editing before publishing from the old posts.

There is a great plugin called Edit Flow that does this! Edit Flow comes with a set of “modules” to make managing site content easier including “Custom Statuses.” Using Edit Flow’s Custom Statuses feature, you can make that “Archived” status to use when removing content from your public site. Better yet, Post Status Menu Items will recognize that new status immediately and add it to the menu for you!

That may seem like a lot to take it, but don’t forget the main point: Don’t delete something; make it a draft. The advanced stuff can come later, but start keeping your old content today. You’ll never know when you need it.