I haven’t posted one of these since May, so let’s get you caught up on what’s been up!

What I’ve Been Up To

I had articles published in Nonprofit Website & App Review (free on iOS and Android, though it’s not working for me right now) and on the NTEN blog as part of their Member Appreciation Month. This blog will still be the home of most of my writing for the foreseeable future, but it’s always fun to share the work I do hear with a different audience.

One of my goals for 2015 was to present more and I achieved that with flying colors. By my count, I gave seven presentations (two for 501 Talks Tech, two WordCamps, InfoCamp, “Speed Geek,” and one large private group training!)

I presented at Seattle’s second WordCamp in October and the presentation has since been posted on WordPress.tv. You can view the slides and video on the original followup post or the video below.

As part of my work on accessibility, in response to a call for increased captioning of WordCamp videos, and a need to walk the walk, I’m working on captioning this video right now for greatly increased accessibility. That should be available in a few weeks!

I was also the speaker recruitment volunteer for this camp. We made big improvements on gender diversity among the speakers for this conference compared to the previous one, but I still think we can get a more diverse pool of speakers next time. Work on that has already begun!

Also in October, I was at InfoCamp Seattle where I lead a very-well-attended discussion/brainstorm about what makes good documentation. 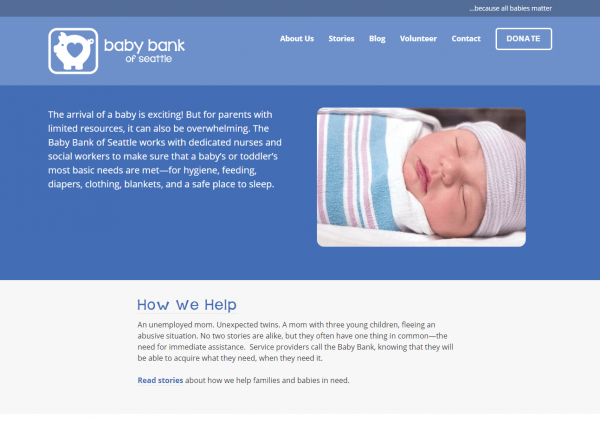 Baby Bank of Seattle came to me in need of a quick site they needed up before the end of the year. Working with a very committed volunteer, we got the job done and launched the site in early December. It’s a relatively simple site for a brand new organization, but I’m quite pleased with how it turned out!

I was doubly pleased with the Baby Bank of Seattle site because of the work it spun off.

We used a “child theme” as our base design and I ran into some issues with the theme. Luckily, the theme author responded to all of my support requests and has already fixed most of the issues.

Without getting too technical, I also realized one of the bugs came from a second theme (this is common, don’t worry), and so I went and fixed the bug in that  theme.

Finally, I was quite pleased with how their donation levels buttons turned out, so I’ll be releasing the small bit of code I used for that as a plugin some time in 2016!

Every January, I spend a morning reviewing my year and setting goals for the new one. I won’t share all my goals, but here are some of the exciting public ones I set.

I’ve got two small plugins I hope to launch soon. Both give site editors easy ways to improve the formatting of their websites. I’m not sure when they’ll get released, but I’d guess the first half of the year.

I’ve been working really hard on a new resource for nonprofits trying to get started with WordPress. That’s all I’ll say for now, but my goal is to launch this site by the end of January, and I’ll post an update to the blog whenever it’s publicly accessible.

I’m not committed to presenting as many times as I did last year (though I’d be fine if I did), but I hope to continue presenting, specifically encouraging people to make their websites more successful. It feels to me that web accessibility gained a lot of momentum this year (especially in the WordPress project), and I hope to contribute to that continuing.

I’ve also really enjoyed participating in my coworking space’s “Office Hours” program. I’ve been meeting with 2-4 people for 30 minutes each once a month and helping them with WordPress, social media, SEO, and website strategy. It’s been fun and, I think, useful to most people who come.

This probably goes without saying, but I’ve got some big projects coming up including at least two that should launch in the first quarter or so of the year.

Time to get to work!