A story in two tweets

Last week I had attended a thought-provoking dinner about all-things-WordPress.

It included a lot of discussion about the state of the WordPress admin. And a few days later, I saw this:

Blog posts I love reading: “Rethinking X”, where X is a feature in WordPress. Be creative, think outside the box, help shape what’s next.

And I thought, “Good idea.”

For you regular blog readers, this one may be a bit in the weeds, but I’d actually really appreciate your feedback, as this is a proposal that would hopefully make your lives easier. If it doesn’t make sense, then it’s a bad idea.

There are lots of quirks about the admin menu in WordPress. “Menus” residing under “Appearance” is maybe my least favorite, but plenty of things are sub-optimal. One possible explanation is that the menu isn’t based around the actions people taken when managing the content of their site. The following isn’t perfect, but let’s try something new just to put it out there.

Here’s a before and after screenshot. 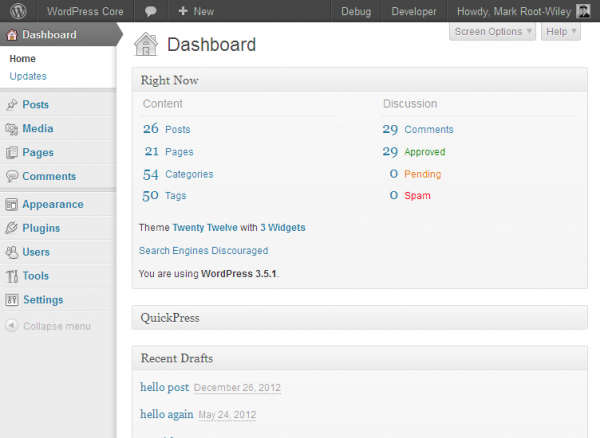 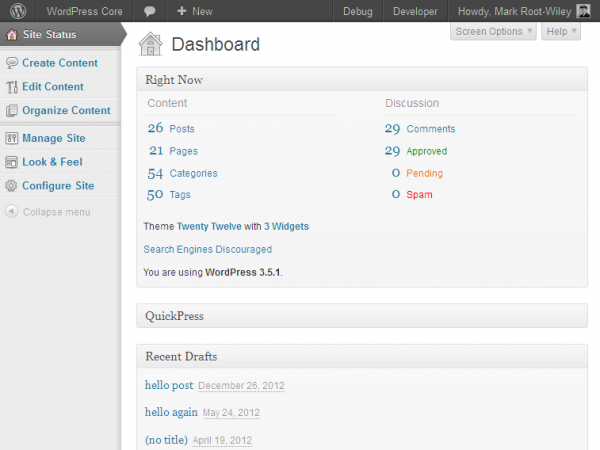 Note: This was done rather quickly so I just used existing menu icons. They don’t really make sense.

What Do You Think?

I should immediately say that I didn’t put a huge amount of effort into this or try out anything else. Rather, I had an idea, set some principles to direct my decisions, and then discovered what happened.

So I’m curious to hear whether this makes sense. Would it help a new user? Would it hinder an existing one? What would you change?

Interesting update here. After tweeting out this article (and getting some positive feedback on Google+), I got this response from WordPress Developer Andrew Nacin:

@mrwweb Interesting! So, this was the UI back in 2.5 and 2.6. Extensive pre-2.7 user tests verified how bad everyone thought it was to use.

And indeed, he’s right! Checkout these screenshots of the 2.3 and 2.6 admins. I’m not sure what this means, but I will say that since WordPress 2.6, we’ve seen the additions of Custom Menus, Custom Post Types, Custom Taxonomies, and a lot more. As WordPress transitions from a blogging platform toward a full-featured CMS, what does this mean for how it’s administered?