Yesterday I released the beta of version 2.0 of my Feature a Page Widget plugin! This new version includes a ton of requested features and an improved design of the widget form.

One of the late design changes I made to the widget form makes me really excited…and terrified. I need a second opinion.

The Feature a Page Widget plugin for WordPress user interface (UI) displays a small preview of content that links to a full page. The display includes the content Title, “Featured Image,” and Excerpt. Here’s a diagram showing the settings and a parts of the widget they control:

The widget adds four new options that are depicted in the diagram:

And when they’re all selected, here’s what it looks like: 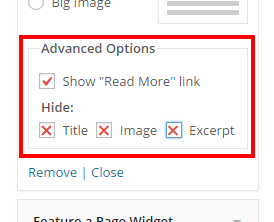 Stop right now and ask yourself, “Can I quickly identify what each of those four options does?”

Now save that thought.

I’ve struggled with this distinction in the past in my Post Status Menu Items plugin that again has checkboxes for both hiding and showing things.

Particularly with that many checkboxes, it can get confusing to keep track of, so my hope is that the check mark and cross distinction will make sense to users and help them track better what each setting does. But I could be wrong.

Reasons that would indicate I should not do this:

So if this UI is a problem, I can see a few solutions:

I’m not thrilled with any of those ideas either, but I want to put them out there for comparison.

What Do You Think?

So I could really use a quick reality check from anyone who’s ever checked a checkbox. I’m assuming that’s everyone.

If you have 30 seconds, please leave a quick comment with your thoughts on the forms and whether two visual checked checkbox designs made it easier or harder to understand the options.

If you’re feeling really generous, take Feature a Page Widget 2.0.0-beta out for a test drive and report back with your findings.

6 thoughts on “Messing with Expectations and UI. Feedback Needed!”