That’s #BABB1E as in “babble,” and this is just a light-hearted post with a bit of knowledge about colors on the web. “Babb1e” is one of the many words you can spell in “hex color codes” (explained more below) and you can find an awesome chart of them at Lexadecimal.com. 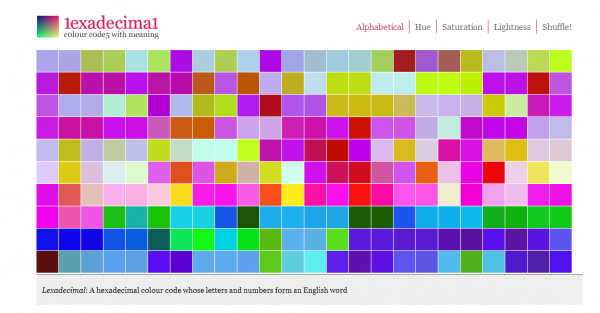 Of course, on the site they spell it “”1exidecima1” and define the word as

Lexidecmial is kind of like leetspeak (or “1337”) which you may have seen while surfing the web at one point or another. But this is much more restrictive than leetspeak, in “lexademical” you can only use the letters A-F and the numbers 0-9 AND all your words have to be six-characters long. I’ll back up here briefly if you’re lost.

There are many ways to represent colors on computers. Take the color “teal”:

That color can be represented in:

Each of those formats uses three values—in the last case, those three are two-character pairs—to represent the various components of a color. HSL stands for Hue, Saturation, Lightness. RGB is Red, Green, Blue. CMYK—common in printing—is Cyan, Magenta, Yellow, Key (which is really just “blacK”). But lexidecimal uses those last hex values—again, only A-F and 0-9—to make words using  some number-for-letter-substitution like “5” for “S” or “1” for “L” or “I.” On Lexadecimal.com, they always use “E” and never “3,” but you could greatly increase the number of colo[u]rs if you included those variants.

You can dive more into hex colors on Wikipedia, but I’d rather let you do that on you own and wrap up with some of my favorite lexadecimal words: