Here’s an oxymoron for you “graceful degradation.” Sounds impossible, right? But it’s great! Graceful degradation is a means of using the newest and best web technologies while maintaining support for older technologies. On every site I build, I use this principle to efficiently build high-quality sites without a ton of extra work.

If you’ve ever heard a web designer complain about Internet Explorer (IE), their feelings arise from these facts:

Sounds like fun, right? There are similar situations for mobile browsers on iPhones, Android phones, Windows phones, and BlackBerries. ((I know! I almost forgot about BlackBerry too!))

Back in browser land, though, other browsers like Firefox, Chrome, and Safari have kept up with the latest technologies and done a better job sticking to stricter, correct interpretations of rules.

Before the latest version of Internet Explorer (which is not used by all IE users), I would have to:

Putting It In Practice

So here’s how graceful degradation works. When faced with this predicament, we web designers have two options:

Because rounded corners are nice to have but not critical to the function of a web page, we can afford to serve up the best experience with the least effort for a majority of visitors. Then, the moment a user upgrades their browser, they get the benefit of the advantages we’ve already programmed in to the site.

In extreme cases, I explicitly encourage people to upgrade. Here’s what the header of this very site looks like in IE 7:

I see that you’re using an older version of Internet Explorer!

This site should be functional, but it’s much more fun to use in the latest version of Internet Explorer or a new version of Firefox or Google Chrome. If you have can upgrade or change browsers, I would encourage you to do so. If not, you can still read the entire site. Enjoy!

As the message makes clear, I made sure that the website works in that browser, but you can see that the shadows around the border of the site are gone and that growing/shrinking menu animation won’t work either. Replicating those features for IE7 would have added many hours to the development process for the 1.45% of visitors using IE7.

Had I decided to make the website work identically in IE7 as the most-recent version of Firefox, I would have almost certainly included fewer features for the majority of visitors who use “modern browsers.” That doesn’t make sense.

Featured in my portfolio, SeattleAWC.org, is a great example of this technique in practice.

In the two images below, you’ll notice some round corners, shadows, gradients, and fonts that all appear differently. The spacing is different a by a couple pixels here or there. But two things that matter most: 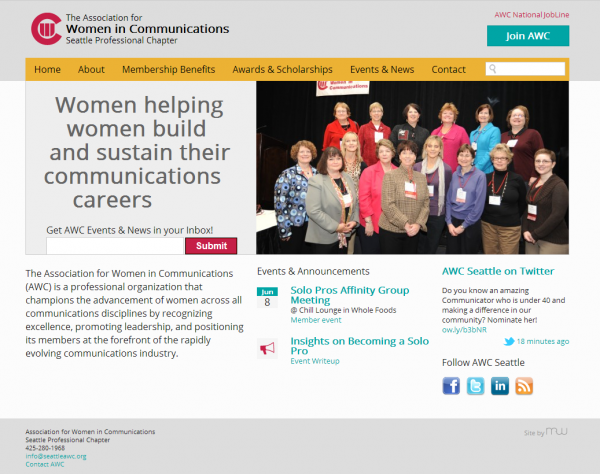 While I’ve already mentioned this in passing, I think I should make clear when to use this technique. I only have a site gracefully degrade in situations where the website is 100% usable without any change in user behavior. If the site were partially broken or even just significantly harder to use in older browsers, then that’s a problem I need to fix. While there are certainly some gray areas, any responsible applications of graceful degradation should focus on the “graceful” part.

Hey, Mark. Can you express the point of this article in just one link?

Why yes! Yes, I can: DoWebsitesNeedToLookExactlyTheSameInEveryBrowser.com. Sorry for leaving it to the end, but now you understand why, too.

A lot of people I explain this to are initially skeptical or uncomfortable with the idea. If that’s you, share why in the comments and we can talk about concerns, pitfalls, and advantages of graceful degradation.

4 thoughts on “Get the Best for Less: Graceful Degradation”