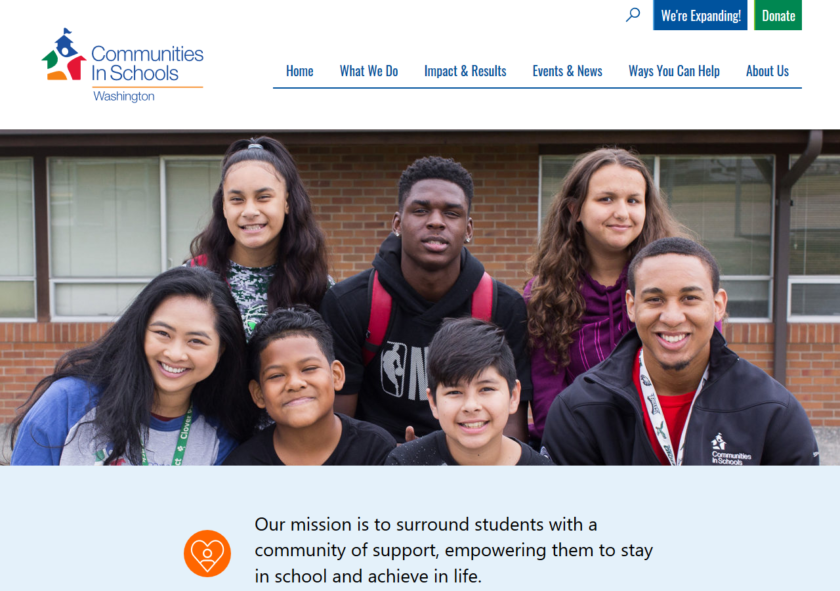 After successfully designing their previous website, Communities In Schools of Washington returned to MRW Web Design for a total visual redesign and improvements to their editorial features.

While the previous site launched in 2013 was a major improvement over its predecessor, the design showed its age, the editing features limited editors in how they could feature their news and events, and the site generally no longer represented the organization as well as it could.

Using WordPress’s “multisite network” feature, the organization’s state office and 13 affiliated organizations all use the same design and features. This is a major operations efficiency for each organization, but requires lots of up-front planning and communication to ensure the design supports every affiliate.

Guided by the state office and a committee of staff from affiliate organizations, a highly strategic project reevaluated the old site and made recommendations for targeted improvements to the design and features. MRW Web Design supported this process, helping craft the questions and suggesting productive ways for stakeholders to provide feedback.

The general content structure of the site designed in 2013 had held up quite well, so the project was able to focus primarily on refreshing the visual design. Minor changes were made to some page names, the menu structure, and the ways certain types of content like Services were edited and displayed. Good planning in the past helped reduce the amount of work and cost of this project!

The final site is built using modern technologies and accessibility best practices, leveraging a highly customized WordPress admin and the new Block Editor to empower site editors to feature the work they do in the best light possible.

In keeping with a strategic approach to the development of the site, there are already plans for improving the site over the six months following launch, and reevaluating pages on a case-by-case basis based on real-world user feedback.

After well over a year of planning, designing, coding, and training, the new CISWA.org is ready to support the Communities In Schools of Washington network for years to come!