Chris Root ((Editor’s Note: She’s my mother, but as you’ll see, she’s more than qualified to be writing here!)) manages the Facebook page for the African Activist Archive, a collection of materials from American activists working in solidarity with African liberation struggles. Having barely used Facebook before launching the page in early 2012, Chris shares nine lessons and observations from managing the page.

1. Getting Your Posts Viewed

I was initially surprised that many people who “Liked” our page didn’t see many of our posts. When you post on your page, that post goes to the “News feed” page of people on Facebook who have “Liked” your page. ((Facebook recently changed its algorithm to significantly reduce the posts by “brand pages” and Facebook pages of large NGOs that show up on people’s news feeds. (See: https://social.ogilvy.com/facebook-algorithmic-change-to-decrease-reach-on-brand-page-posts/) This change hasn’t affected our Facebook page, but never expect things to stay as they are on Facebook.))  But some people don’t look at their Facebook page very often. At the other end of the spectrum, some people spend lots of time on Facebook but have so many friends that they don’t scroll through all the posts that appear on their page.

For a few months this summer, Facebook showed administrators the percentage of those people who have “Liked” your page who “see” each post. For us, this percentage was usually between 38% and 44%, which is pretty good. Of course, some people come to your Facebook page and see your posts without Liking the page, but not many. In the last month, the average number of people who actually visited our page on any one day was only 5!  The power of Facebook’s social networking is that people see your content without making the effort to come to your page.

It takes a long time to build a following. After nine months, 400 people “Like” our page. I’m happy with that. Remember that the goal is to find people who actually are interested in your page, not just to inflate the number of Likes.

Many people have come to our page and Liked it in response to publicity we have done. When we launched the page, we invited many of our personal Facebook friends to Like the page. After we had several months of content, we sent messages to several relevant listservs, with good results.

However, publicizing our Facebook page to people when they are not on their computer – on a leaflet or at a meeting – has almost no effect, in our experience.

Only rarely is there a chain of new people Liking our page because they heard about it from their Facebook friends. It does happen, especially from tagging a photo of someone who has lots of Facebook friends. Look for opportunities to tag photos! We are pleasantly surprised that being on Facebook has generated an audience for us in Portugal (the former colonial power in Angola and Mozambique) and Brazil; we don’t know where this network began.

It’s difficult to consistently create posts that people will Like or Share. Our highest-response post so far is this photo (from the African Activist Archive website at: http://africanactivist.msu.edu/) of Nelson Mandela, wishing him a happy 94th birthday. Almost all our other especially popular posts are also photos, including ones with both well-respected liberation movement leaders and U.S. celebrities such as Harry Belafonte, Bill Cosby, and Little Steven van Zandt. You can’t have this kind of post every time!  Other popular posts were celebrating Africa Liberation Day (a link to an article, with no message about our project), photos of activists (though this isn’t a guarantee), and a short poem of which we created a graphic.

My approach is to have a variety of types of posts, not all of which are “Look at us!” We also announce relevant films and other online archive projects and link to obituaries of former activists, for example. There are lots of “this day in history” kinds of posts with an image or document about that day from our website. Even if some of these types of posts aren’t particularly popular, it’s also important to post with some regularity (I aim for 7 or 8 per month – equivalent to 85 to 95 posts in a year). Diverse posts are important to keep from being boring. So I don’t expect  each post to get lots of Likes and Shares.

8. Judging a Page By Its Cover

We have a very nice cover image on the Facebook page, so the first impression is good. (It helps to have lots of wonderful graphics – and a son who is a website designer!) 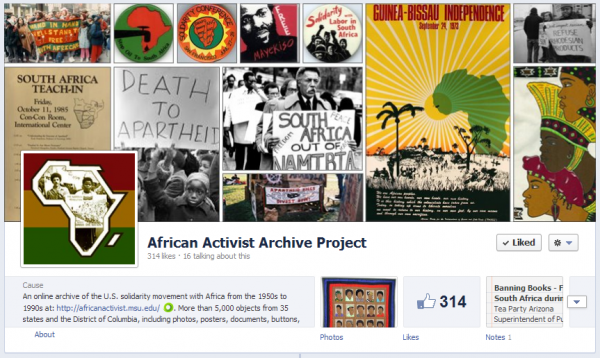 I probably spend two hours each week thinking about, composing, and putting up posts as well as considering overall strategy and keeping records. This includes creating a Word document listing historical events in each month, since our project is a digital archive. Publicity to listservs in April and May took about three hours, I’d guess. Doing outreach requires first having good ideas of what to do, which I can always use more of.